Believe in you
Se connecter

Decode your market and get experts' insights into new development approaches with the analyses and articles in the Business Focus section.

Several months after the start of the Covid-19 pandemic, the national and international economic environment seems to confirm the long-awaited recovery. In Morocco, some sectors are already performing well, while others will have to rely on the stabilization of the health situation. In this context, VSEs and SMEs can count on various government support mechanisms to help them move forward.

In its latest economic report, the Department of Studies and Financial Forecasts (DEPF) of the Ministry of the Economy, Finance and Administration Reform expresses relative optimism regarding the outlook for the national and international economy. After 2020, which was severely scarred by the consequences of the Covid-19 pandemic, the first months of 2021 show positive signs of economic recovery.

Strong international growth in 2021, according to the IMF

On the international arena, large-scale stimulus plans and the success of vaccination campaigns in advanced countries are leading the International Monetary Fund (IMF) to be optimistic. The IMF is forecasting 6% growth in 2021, after the -3.3% decline in 2020. This growth is driven by China, which seems to have fully recovered from the crisis, with a forecast of 8.4% (versus 2.3% in 2020), and the United States, with a forecast of 6.4% (after   -3.5% in 2020).

However, the European Commission and the IMF are still cautious and point out the many uncertainties linked to the evolution of the pandemic and the success of vaccines, including against variants of the virus. The next few months will therefore provide further indications of these rather tenuous forecasts.

Morocco is driven by the primary and secondary sectors

In 2021, the Moroccan economy will benefit from a very good agricultural season. According to the latest forecasts from the Ministry of Agriculture, production of the three main cereals (soft wheat, durum wheat and barley) is expected to reach 98 million quintals, representing an increase of 54.8% compared to the average for the last five years and 206% compared to the previous season.

The results are also very promising in the secondary sector, thanks to the mining, construction and industrial sectors, which benefit from the good performance of their exports. Thus, the first quarter of 2021 recorded a 6.6% increase in phosphate production (after 0.1% in 2020) and a 6.4% increase in phosphate derivatives. In addition, the value of exports of phosphates and derivatives increased by 21.7%, benefiting from a 42.3% increase in March, after +3.9% in February and +12.6% in January 2021, according to the Directorate of Studies and Financial Forecasts (DEPF). Raw phosphate prices stood at $95 per ton in April, up 34% in one year. DAP (diammonium phosphate) prices, meanwhile, continued to rise, reaching $543 per ton in March, their highest level since 2012, marking a 93% increase over one year. 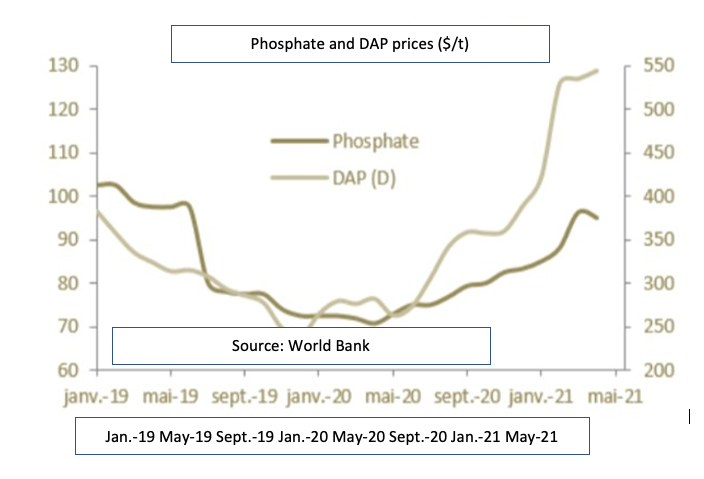 Furthermore, the turnaround in the manufacturing sector, which began at the end of 2020, continued in early 2021, notably with the growth of the chemical and para-chemical, agri-food, mechanical and metallurgical industries. Here again, exports are sometimes up sharply in the first quarter of 2021 compared to the first quarter of 2020, especially for the automotive (+38.9%) and for the electronics and electrical (+21.5%.) sectors. As for the month of April 2021, the results of Bank Al-Maghrib's business survey of the manufacturing sector indicate a stagnant activity in comparison with the previous month, with a level close to that prior to the crisis.

After an easing in the fourth quarter of 2020, restrictions on air and sea passenger traffic were again tightened in the first quarter of 2021, due to the development of new variants of Covid-19 and to the deterioration of the health situation affecting the Kingdom's main partners, particularly Europe. As a consequence, the downward trend of tourism revenues has worsened during this period, with a decline of 69.1%, i.e. a loss of MAD 11.9 billion (DEPF). 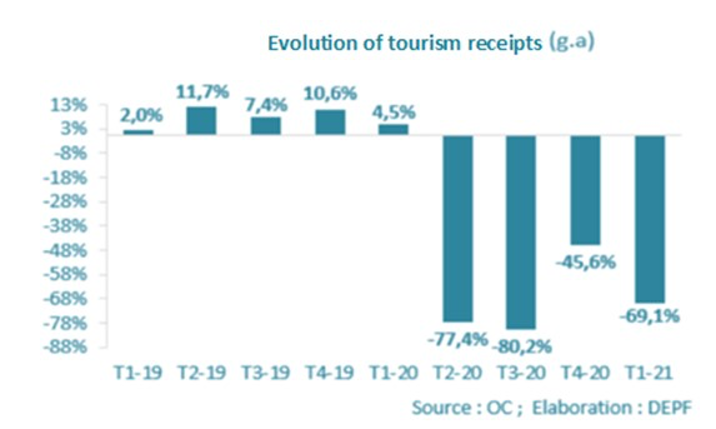 Several operators have noted an improvement in the second half of 2021, with the good results of the national vaccination campaign, the gradual reopening of borders and the exceptional measures that have facilitated the arrival of MREs (Moroccans living abroad) this summer.

Improvement of the domestic market

According to the Directorate of Studies and Financial Forecasts, household consumption should gradually improve during 2021, strengthening domestic demand. Their purchasing power is indeed supported by a good orientation of income levels and the good levels of remittances from MREs (+41.8% at the end of March 2021), in a context marked by a quasi-stagnation of inflation (+0.1% at the end of March 2021).

The DEPF indicated that the vitality of domestic demand fundamentals should also be stimulated by the gradual return of optimism on the part of both households and businesses, against the backdrop of the stepped-up deployment of the Covid-19 vaccine.

The Ministry of Economy and Finance also notes that Morocco's foreign trade is marked by an improvement in the coverage rate of 5.7 points at the end of March 2021, and a reduction of 11.2% of the trade deficit, as a result of a sustained 12.7% rise of exports, compared to a moderate 2.6% rise of imports (DEPF).

In this difficult context, the Ministry of Industry, Trade, and the Green and Digital Economy has launched a new generation of support programs for industrial VSEs and SMEs. This initiative, led by Maroc PME, “is in line with the High Royal Guidelines, emphasizing the updating of support programs for businesses, especially those aimed at improving their access to finance, increasing their productivity, and training and upgrading of their human resources. The aim is to enhance the competitiveness of Moroccan businesses, strengthen their export capabilities, and increase their job creation potential.”

Thus, in 2020, the Mouwakaba and Istitmar programs have been enhanced to better meet the new environment. Istitmar has generated an overall investment of MAD 2.8 billion and 25,357 direct and indirect jobs, whilst Mouwakaba has enabled more businesses to benefit from technical expertise and advisory services. In addition, new programs have been developed within Maroc PME as part of the Industrial Recovery Plan: Nawat, which supports very small enterprises in setting up their projects, Tatwir Croissance Verte, which supports the decarbonization of industrial VSEs and SMEs, and Tawtir Startup, which supports project leaders from the idea stage through to industrialization.

Launch of an industrial project bank

Lastly, the Ministry has also launched an industrial project bank to promote and support the industrial sector. It is part of the new industrial recovery plan (2021-2023), which is based in particular on the establishment of a policy of import substitution with the objective of filling MAD 34 billion of imports with local production. During the Covid-19 pandemic, Moroccan industry demonstrated its potential to manufacture products and equipment that meet international standards and can cater to local and foreign demand, and this initiative aims to reinforce this ambition by stimulating investment.

The project bank consists of a hundred project files, representing several industrial branches, whose objective is to give a comprehensive view of opportunities for boosting the domestic market. The aim is to provide access to general information based on public data and interviews with experts and industrialists in each sector: agri-food, textiles, leather, chemicals, pharmaceuticals, plastics, electronics, etc. Thus, to date, 142 agreements have been signed, for MAD 8 billion of investment.

With these initiatives, industry should contribute to the Kingdom's economic recovery in 2021, allowing SMEs to regain the necessary momentum for their development.

The industrial project bank fact sheets are available on the website of the Ministry of Industry, Trade, and the Green and Digital Economy. They provide an overview of the main opportunities for boosting the domestic market: https://banquedeprojets.mcinet.gov.ma/fr/projet

In the framework of this initiative, the Ministry also offers a guide for project leaders that can be downloaded online: https://banquedeprojets.mcinet.gov.ma/fr/guide-du-porteur-de-projet

This program supports businesses in their global transformation process through the implementation of complementary offerings of expertise and technical assistance, digital transformation, as well as support for Creativity & Co-development projects. These offerings are a mix of assistance and financial support to meet the specific needs of SMEs.
https://marocpme.gov.ma/mowakaba-tpme/

This program supports companies with high growth potential and development projects through the granting of an investment allowance for tangible or intangible investments.
https://marocpme.gov.ma/istitmar/

This program supports very small enterprises, auto-entrepreneurs and project leaders to successfully set up their projects, have access to finance and ensure the sustainability and development of their business.
https://marocpme.gov.ma/nawat-ae-tpe/

This program supports the decarbonization of industrial VSEs and SMEs through investment support, consulting, technical expertise and innovation support.
https://marocpme.gov.ma/programme-tatwir-croissance-verte/

This program provides end-to-end support for startup project leaders, from the idea stage through to industrialization and the various incubation phases.
https://marocpme.gov.ma/tatwir-startup/

In the wake of the confinement period observed by the Kingdom, companies are somehow resuming their business activities [...]

In addition to being sustained by a comprehensive Compact up to 2021, agri-food industries further benefit from the results achieved [...]

Covid-19 related crisis: an update of the situation

Very heavily affected by the Covid-19 related crisis, the global economy should witness in 2020 its most severe recession since [...]

Do you want to pay a selection of your favorite bills in one transaction? This new feature will allow you to save time by paying all your bills together.

Learn more
Make all your transfers with a single transaction! 20 December 2022

Do you need to gather your transfers into one transaction? The new transfer process unit has been redesigned to enable several transfers in a single transaction and save templates for your recurring transfers. Try out the new feature now!

Do you want to add a 2nd administrator to co-manage your accounts and co-authorize your online banking rights? Our new dual administration feature is exactly what you need! Enable it for free at your Business Center.

Do you buy and sell UCITS or stock market securities? This novelty is for you!

You can now, through your online banking portal or the Attijari Entreprise mobile application, place orders on the stock market and UCITS. Request activation of this digital feature for free from your Attijariwafa bank's branch or Business Center.